Per Mare, Per Terram (By Sea, By Land)

The Royal Marines were first established in 1664 as The Duke of York and Albany's Maritime Regiment of Foot. By the Napoleonic Wars they were established with seniority between the 49th and 50th Regiments of Foot - meaning that if they were on parade with the Army they would stand between these two regiments.

The Royal Marines served throughout the Napoleonic Wars in every notable naval battle on board the Royal Navy's ships and participated in multiple amphibious actions. Marines had a dual function aboard ships of the Royal Navy in this period; routinely, they ensured the security of the ship's officers and supported their maintenance of discipline in the ship's crew, and in battle, they engaged the enemy's crews, whether firing from positions on their own ship, or fighting in boarding actions

They were given the title 'Royal' in 1802 as a testament to their services.

There were three main Divisions of Marines, at Chatham, Portsmouth and Plymouth, the three main Royal Navy bases. A fourth Division was added at Woolwich in 1804.

Training took place at one of these three divisional centres, and unless at sea, a Marine was based at his particular Division for administration purposes.

Initially, a Marine's training followed that of the Army: he learned the basic foot drill, marching and manouvres. Once aboard ship, training changed to include boarding drill, repelling boarders, and (where possible) landings.

A manual written by an officer in 1755 also suggests training Marines to go aloft, where they could fire down from the fighting tops onto the deck of an enemy ship.

Aboard ship, Marines stood sentry at various posts throughout the ship: Outside the Captain's cabin and wardroom/gunroom, by the quarterdeck stairs or at the quarterdeck end of each gangway, outside the hanging magazine and the spirit room. Other posts were at the bottom of each companionway (ladder) when in action, to prevent men from shirking their duty and deserting their posts in order to hide below, over the lightroom in case of accident, and over prisoners in irons.

They also performed many duties aboard ship that required unskilled brute force, such as weighing anchor, hauling on halliards when setting sail.

In action, they were small-arms men, though not all of the Marines in a ship's detachment were listed as such on the watch-bill. They often helped crew the 'great guns', the cannon which were a ship's main armament.

Their rank structure followed that of the Army.

Colonels (very often Naval officers given the title (and pay) of Colonel of Marines as a sinecure) were most usually given shore-based positions, for example as Commandant of one of the various Royal Marines' barracks.

Unlike the sailors, the Royal Marines had a uniform, which was very similar to that worn by the Army. Before 1802, it consisted of a white-faced red coat with white trousers or breeches, black gaiters, a black stock and a black hat. After 1802, the jacket was faced with blue as befitted a Corps with a Royal title. White trousers were still issued for warmer climates (such as service in the Mediterranean or West Indies) but blue trousers were issued for service in colder climate (such as Marines aboard ships blockading Brest or serving in the Baltic).

Officers' gorgets and buttons changed from silver to gold and the stripe in the Sergeants' waist sashes was altered from white to blue.

The Royal Marines in Show the Colours

The fictional detachment of Marines aboard HMS Terpsichore are all from Chatham division. There are one officer, one Sergeant, two Corporals, three drummers and about 35 privates aboard. Played Marine characters include Captain Arthur Cartwright, Corporal George Thompson, the drummer Tom Oxley (though the other drummers are regularly-appearing NPCs) and Privates Cross Johnson, Nathan Allen, Tom Branning, James Gunn, and Terence Whyte.

Cross Johnson was recently demoted from Corporal to Private[1], and placed in Corporal Thompson's squad. So far, he has not yet been permanently replaced.

The complete list of Marines serving aboard HMS Terpsichore is as follows: 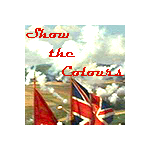